Notarization is provided with proof of valid Identification, to be signed in front of the Notary Public.

​What Is a Notary Public?

A Notary's duty is to screen the signers of important documents — such as property deeds, wills and powers of attorney — for their true identity, their willingness to sign without duress or intimidation, and their awareness of the contents of the document or transaction. Some notarizations also require the Notary to put the signer under an oath, declaring under penalty of perjury that the information contained in a document is true and correct.

Impartiality is the foundation of the Notary's public trust. They are duty-bound not to act in situations where they have a personal interest. The public trusts that the Notary’s screening tasks have not been corrupted by self-interest. And impartiality dictates that a Notary never refuse to serve a person due to race, nationality, religion, politics, sexual orientation or status as a non-customer.

As official representatives of the state, Notaries Public certify the proper execution of many of the life-changing documents of private citizens — whether those diverse transactions convey real estate, grant powers of attorney, establish a prenuptial agreement, or perform the multitude of other activities that enable our civil society to function.

A Notary Public is an official of integrity appointed by state government —typically by the secretary of state — to serve the public as an impartial witness in performing a variety of official fraud-deterrent acts related to the signing of important documents. These official acts are called notarizations, or notarial acts. Notaries are publicly commissioned as “ministerial” officials, meaning that they are expected to follow written rules without the exercise of significant personal discretion, as would otherwise be the case with a “judicial” official. 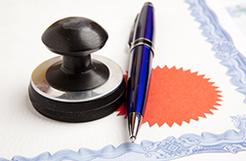